You are here: Home » Uncategorized » Wolroy House – Restoration of a Cape Town Original

A historic building, Wolroy House is a national monument, situated opposite the police station in lower Buitenkant Street in Cape Town’s city centre.

MCM Painters was contracted to carry out structural repair and cosmetic restoration work. As a ‘resident’ of Cape Town city centre, paint systems deteriorate over time due to environmental factors like windy summers and rainy winters. After a few years, water will start to penetrate the substrate which causes defective plaster as well as delamination of expansion joints, window sealant and spalling. Chemicals released into the environment can also play a part.

Preparation was very important on this job. Our plan of action included starting with following our Midas specification in full. It took three teams a time period of six months to complete the work on this five-storey building that required extensive scaffolding, rope technicians and complying with the City of Cape Town’s safety regulations. 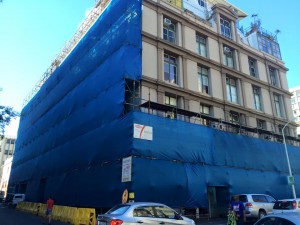 Today, the building has a full three-coat paint system in place to protect it from the elements and we expect this system to protect the building from water ingress and deterioration for the next seven years.

John Grainger, the Chairperson of the Wolroy House Body Corporate at the time of the project, had this to say: “Many of the difficulties and obstacles encountered during the recent major refurbishment of Wolroy House were resolved through weekly site meetings between the Body Corporate trustees and MCM Painters representatives. In my view, the willingness of MCM Painters  to actively participate in every site meeting was one of the most positive aspects of our extended relationship with MCM Painters .”

About MCM Painters
MCM Painters is a professional contractor that specialises in painting, waterproofing and structural repair work in Cape Town and surrounding areas. As a local market leader with 15 years of experience in the business, we take great pride in our work and provide the highest quality workmanship at a competitive price. We guarantee our work, including manufacturer guarantees, for five years.
Contact Ross Peacock on 082 827 1817 or ross@mcmpainters.co.za for further information or to get a free assessment done. MCM Painters – We realise your renovation vision.

Van Riebeeck – The secret to successful...

Arundel Gardens: The value of a good project...

It has only been a pleasure working with MCM Painters on the projects they have been assigned to. They have always been available to discuss technical difficulties and we have found them flexible and willing to assist when problems arise, and when our clients require changes to their project program.